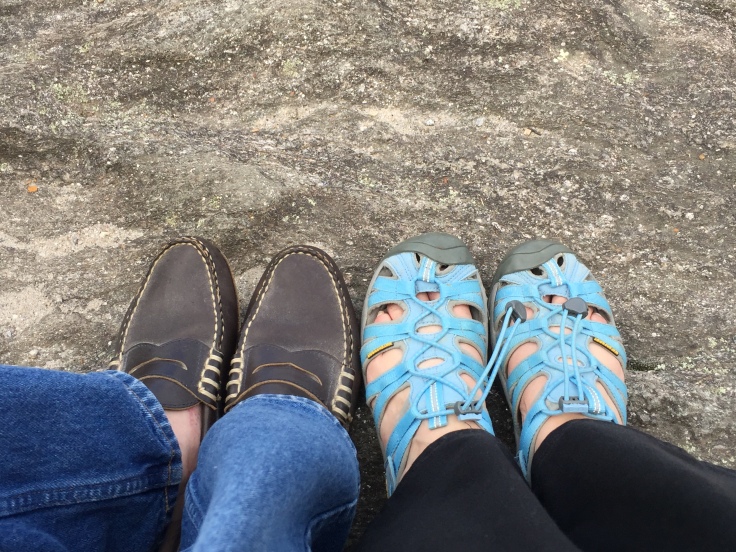 Back in 2002, at age forty-one, MayBelle, who theretofore had been considered an “old maid,” transitioned to someone who “married late.” She resents both those descriptors, as you might imagine MayBelle would, because there were no guarantees—or requirements—she would ever marry. MayBelle is delighted that cultural norms have shifted at least somewhat although not enough to suit her–especially in the Deep South where she lives–toward realizing marriage is not the only route to happiness.

One element of such partnering is a numbers game, along with a dash or two of serendipity and a handful of what might only be described as “secret ingredients.” MayBelle’s parents did not promise her a prince, riding a horse or otherwise. They were too busy telling her she had to go to graduate school so she would be positioned to support herself. MayBelle is driven to distraction by people who fill little girls’ heads with seemingly surefire notions of weddings and white-picket-fence happily ever afters (is this really a thing?) as if it’s a done deal. Some folks get it, and some don’t. (MayBelle knows she’s talked about this before, but that’s how much it bugs her. She appreciates your indulgence.)

Several of MayBelle’s mentors have been women who never married. Her Aunt Vannie, for example, who lit out from Water Valley, Mississippi, for Greenwich Village and made a life for herself by herself. What a fabulous broad she was. MayBelle still wears a shawl (black and white, from England) and a big ol’ topaz ring she got from Vannie, that enticing woman now long laid low. And her Aunt Theora, who took up painting later in life and developed into an acclaimed, self-taught artist.

Here’s another thing MayBelle loathes: “Why did you wait so long to marry?” Because, she wants to snap back, it took that long for Precious to get here. Plus, if you must know, the only guy who asked her before that was drunk at the time, and the only one she thought she might have wanted ended up marrying a friend of hers. Two friends, actually, after the first one divorced him.

MayBelle may have been a little slow to matters of the heart, not having dated much in her life, but she did know enough not to say “I do” simply to avoid living alone. So when MayBelle and Precious, who is six years older than she, announced they were getting married she thinks they were as surprised as anyone. And really, really, grateful.

MayBelle heard the whispers, though, people saying they wondered if she knew everything about him, and did he know how much MayBelle adored (the word “worshipped” might have been employed, for emphasis) her father?

“No wonder she didn’t marry until after her father died,” was an especially insightful barb tossed her way. (Did MayBelle’s sarcastic tone come through there? If not, let her know and she’ll try again.) Baggage all around. Of course there’s baggage, MayBelle wanted to shout; we’re alive, aren’t we? And in our forties, for goodness sake. No baggage, no fully lived life, thinks MayBelle.

Those comments reminded MayBelle, in an intensely personal way, about the need for minding one’s own business: Don’t think you know best about other people’s lives. Tend your own instead.

And here they are, celebrating fifteen years of marriage. It’s not a lifetime, they realize, or an assurance of fifteen more, but it’s what they’ve got, and they’ll take it. They celebrated, in part, by hiking to a beautiful spot in western North Carolina, even though Precious’ idea of outdoorsy is being on the golf course and MayBelle has only recently taken to exercising. This is what marriage looks like to them: Walking side by side, even when the husband wears shoes meant for strolling, not trail trekking, and the wife keeps asking if they should turn back. Four feet, two hearts, one team.

MayBelle and Precious are not the kind of people who think love is enough. They don’t post on social media (Can you imagine Precious on Facebook?) about having “the most perfect spouse in the world,” and they don’t take much for granted. They think you need love, sure, but you also need luck, and a bit of work. Commitment helps, and trust, and all sorts of other intangible components that contribute to tangible sustainability.

So MayBelle and Precious can both tell you when they “ just knew” they were meant to be together, although they can’t necessarily tell you one another’s favorite flavor of ice cream. And no, they don’t have an “our song,” but if they did, it would be John Hiatt’s “Have a Little Faith in Me.”

One thought on “MayBelle on Marriage {Don’t Worry, This Won’t Take Long}”