Or worse, a “badass.” MayBelle doesn’t want to be any of those things. She just wants to be herself. Maybe, in this new year, a more refined MayBelle, or even the most MayBelle-iest MayBelle she can be. But she refuses to be overwhelmed/intimidated/shamed by messages implying that she needs to be different—that she has to re-create who she is—in order to live a full life or make a mark. Her middle-aged MayBelle-ness—overweight and prone to worry, proud of her accomplishments while embarrassed by missteps, aware of time passing but still hopeful—simply has to be enough.

So in the coming days, 2018, MayBelle plans to “center down” as Howard Thurman says in Meditations of the Heart. She will rise to her strengths as often as she can. She hopes to help those in need when she’s able, tend her loved ones with care and compassion, take advantage of opportunities that present themselves, push herself to be healthier, follow her heart, improve her skills, and in all things give thanks. But please don’t tell MayBelle every day has to be awesome, New Year, because some days aren’t. Some days are just plan ol’ days, full of mundane events and interactions. And while MayBelle believes there is usually something extraordinary in the ordinary, other days are so challenging they can only be endured. It’s life. And life requires more than positive thinking and exhortations to be a “badass” or claim one’s inner warrior. MayBelle actually hopes she doesn’t read the word “badass” again in all of 2018, and she’s glad her precious mother is not here to see how commonplace such words have become. (Pardon her prudishness, but MayBelle, for one, does not need the f-word on a coffee mug.)

Surely MayBelle doesn’t have to be a change agent or a goddess to live fully, serve others, pursue her dreams. She just has to be herself. So, 2018, you will not find MayBelle berating herself if every day isn’t off the charts fantastic. You won’t catch her strategizing for world–or even neighborhood–domination.

Instead, MayBelle will be over here doing the best she can. Paying attention to the world around her, writing her heart out, and helping others do the same. Making adjustments as needed, relying on grace, and counting her blessings. If she loses a few pounds or gets a book deal in the process, great. If not, she’ll still be pretty bada**. 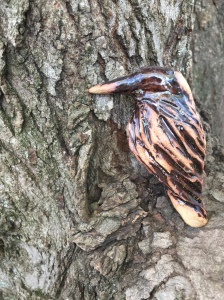 I lose it about 4 a.m. on Wednesday. I think I scare the nurse a bit, for it must be like seeing his mother break down. That’s how young he is. And he is great at his job. Also, a doll.

“I need to draw more blood,” he says. “Another culture.”

This means taking a good bit of blood. How do I have any to spare? I start to cry.

He stands in the doorway a few seconds, unsure.

“I just need a minute,” I say, grabbing for some tissues. “I don’t think it’s all that strange for me to feel frustrated.”

It’s as if, as usual—I’ve done it all my life so I shouldn’t be surprised—I’m seeking permission. Approval.

Oh, those words, precious boy. He doesn’t say they’ll cure me, or that it will be easy, or that he has answers. Just: We’ll get you through this. Pardon the cliché but it is just what the doctor ordered. (Or should have.)

Later Wednesday morning I feel a bit better, but there is still no diagnosis. Some big things have been ruled out. The hematologist tells me this happens more often than you might think, that an infection invades your body and you never know its source.

Then, toward evening, I see a crow eating a goldfinch. Right there on the ledge outside my window. I notice little bits of fluff wandering around the sky, and I see the crow picking at something at its feet. When it turns over its prey, there is a brilliant flash of yellow. I am mesmerized, trying to decide if this is a sign of some sort for me—the cycle of life and death and all—or merely nature doing its thing. And if it is the cycle of life and death, which will it be for me? I am sad and mesmerized by nature all at once.

I can’t get to my phone to take a picture and while I hear you saying, “Bless her heart. She was probably hopped up on good drugs and just imagines she saw a crow eating a goldfinch,” let me remind you that when I ask for some calming medication, I am given melatonin, people, not anything mood inducing. (And when I tell the nurse the melatonin didn’t really do the trick, I am given MORE melatonin.)

I decide not to take the crow incident as a sign and instead say a blessing of gratitude for all that nature–and man–is capable of. I go back to watching Gilmore Girls. I didn’t follow the series when it first aired and I am quickly becoming hooked. Hooked, I tell you. I want to dress like Lorelei (sp?), drink coffee out of bowl-like mugs, and matriculate at Yale. Somebody get me out of here…

My dinner is pretty tasty, and, ta da, is actually what I ordered. (Several times my order was not what I ordered and that was disappointing. Not a big deal, but when what you have to look forward to is a biscuit with turkey sausage and you don’t get it, it can seem like a much bigger deal than it would on a regular day, like when you don’t think you’re dying and there isn’t a crow eating a goldfinch outside your window.)

When I wake up on Thursday morning I am covered in sweat. Instead of being grossed out, I am delighted, as I think it means I am on the mend.

“I think my fever broke,” I text Precious.

Several hours later the doctors tell me my white count is on the upswing, my fever is down, and I’m free to go. Still no diagnosis, and oral antibiotics and follow-up checks will be necessary. I’m a little scared to leave, actually, what with the not knowing and all. But apparently if I want to wait until I get some sort of definitive answer, a reason, I will be hospitalized for a very long time.

Although I have never believed in a puppeteer kind of God, a deity that picks and chooses who will suffer and who will flourish and decides which of us needs to learn a lesson and which folks can afford to skip class, I must say I’m trying to see this experience as a learning opportunity for me, in that I have long been one who wanted to figure everything out, to have a cause and effect that I could grasp. To understand. Even if it was bad, I’d say, I want to know. And now I don’t. I am being called to lean into the mystery, so lean I shall.