Back in January 1922 my parents were born four days apart. My father in Bell, California, and my mother in Tula, Mississippi. They would meet several years later at elementary school when my father’s family returned to its southern roots, and they married in 1948.

Although there were balloons and decorations and cake for my mother on her birthday earlier this month, she would not have known it was her day unless someone had made a fuss. Her dementia robs her of a lot, such as keeping up with dates and important life events. She sometimes thinks her parents have just died and that she wasn’t able to get to their funerals. I hate this for her, that her mind is not only failing her but is also tricking her, goading her into thinking she failed her parents. When, in reality, she was a devoted and faithful daughter until the very end, when she saw her mother and father across the bar and into the ground at St. Peter’s Cemetery in Oxford, Mississippi.

So she loses memories and facts, but she retains her grace, and her humor, and her kindness.

At Christmas I held her hand while we watched part of “Miracle on 34th Street,” which I had never seen and for some reason insist on referring to as “Miracle on 51st Street.” I left after Santa was put in the hoosegow, so it is my fervent hope that the poor man got sprung before the movie was over.

When I arrived that day at the residential facility where she lives, she was resting in her chair with her eyes closed. I sat on the edge of her bed and waited for her to wake up. When she did, she took a few seconds to stare at me with love.

“I recognize you,” she said, smiling.

Her eyes were clear and lively, not dulled as they can sometimes seem when she is having a harder time focusing and engaging. It was the same smile I have seen on her precious face countless times before, an upturn of her lips that let me know she is still my mother. 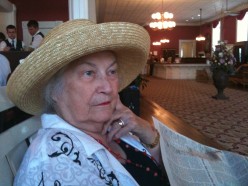 I type these words as I email my prayer request to some folks at church, people who might be aware my mother is still living but who don’t necessarily know her name. They might even have a vague recollection that she’s in Mississippi, but they can’t know that we used to dance together in the living room to “I’m a little teapot,” or about the memorable conversation we had while riding the ferry from Woods Hole to Martha’s Vineyard, or how she used to sign her letters “Love, Me.”

“My mother has been hospitalized with pneumonia,” I write. “She is 93 and has dementia. I worry that she’s afraid. Her name is Martha.”

We hate this for her, my sisters and me, her body being subjected to multiple injections and further indignities. She’s had breast and colon cancer; blood clots in her lungs; gallbladder surgery; Crohn’s disease. Hasn’t she suffered enough? I pray for her not to linger, and wonder if I am trying to outmaneuver God.

This is what I would whisper to my mother at her bedside, but my sisters tell me not to drive the 400 miles south toward the town of our births.

We’ve been at the brink a couple of times, so close that my sisters and I once gathered in the hospital lobby to go over our notes about what Mother said she wanted at her funeral and draft her obituary. We sometimes pretend we are prepared.

Several days after penning that prayer request, my mother was released from the hospital. She does not remember what was done to her, or why. And maybe that is for the best.

So we continue on, grateful for today, and trying not to borrow trouble for tomorrow.

I volunteer at a hospital once a week, helping out in a clinic. I greet patients and get them signed in, do assorted clerical tasks.

Last week I overheard someone ask a small child, who was waiting with his grandparent, this question:

“Are you a good little boy?”

There was a pause, and then: “Sometimes.”

I was cringing behind the filing cabinet, but what I wanted to do was leap out into the waiting room and scoop up the child and reassure him that yes, of course, he is good, good in the eyes of God, for one thing, and that we shouldn’t label people as “good” or “bad,” even if we’re tempted to classify individual actions as such. That we are not just one quality or another and that on any given day we will do things some people will consider proper and others will question. That when we mess up we get to try again, and we’re not—hopefully—branded as “good” or “bad” for a lifetime because of how we acted in our younger days. Or the mistake we made last week.

I’m not really comfortable with that kind of language, “good in the eyes of God,” but it was what came to my mind, and heart, as this precious, tender, toddler tried to decide if he was “good” or “bad” because some stranger had the gall to ask him such a loaded and unfair question.

He’s a kid, for crying out loud. Why not ask him if he plays with Paw Patrol (my great nephew’s current favorite), or what he likes to eat for breakfast? Inquiring about his age would work, or if he has brothers and sisters. But not, for the love of all that is holy, “Are you good?”